At an age when other girls take for granted Cindy Lauper and “just wanna have fun”, she organizes gatherings of protest in central Stockholm. In late September this year, half Romanian- half Swedish 17 years old Felicia Margineanu persuaded thousands of Swedes to leave their warm houses for a couple of hours and join her to protest in central Stockholm against racism and extremism.

“There is no more space for foreigners in Sweden!” (Jimmie Akesson, leader Sverigedemokraterna). It was this phrase that made the 17 years old girl to react in a way that nobody expected. A couple of hours after Sweden Democrats announced that they won for the first time in the history seats in Sweden’s Parliament, Felicia launched an instant message on Facebook, a very popular social network. Almost instantly thousands of people answered positively and from here to a little riot there was just one step left. Soon other protests directed against the far-right Swedish party began to break out all over Sweden.

The Facebook message with which Felicia wrote a small but important page in Sweden’s recent history:

“After this elections Sweden's citizens must engage themselves into politics more than ever. People are angry, frustrated and, above all, they careNOW. Sweden will have a change, come on now people! Votes are not everything, what is needed is ACTION!!!” 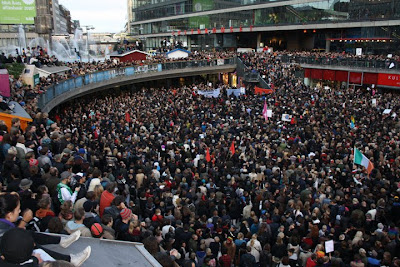 Even if Felicia does not have yet the legal right to vote, she has instead something more valuable: the courage to use power of the speech and more than that, initiative. A simple but a very important 10 letter word, that makes the difference between a humble personal opinion and a more powerful and sharp voice of the “folk”. Felicia used that not just to see if she can gather 6.000 people in a couple of hours in the same place to fight for the same ideal but also to demonstrate to the entire world that even a single voice can make the difference if you have the courage to use it.

But who is Felicia Margineanu in daily life? Is she really one of the next leaders of the young generation? To find out more I walked in the footsteps of the 17 years old girl that managed to gather 6.000 people in the center of Stockholm. Two months passed since the first protest. Sunday 28 November 2010 I finally met her for an interview in exactly the same place: the middle of the Sergelstorg, Stockholm. But the weather is not our ally, - 13 degrees means that we must trade the square for a warmer place. Felicia knew a warm and cozy place and that’s how we ended up, coincidentally or not, on a neutral ground called “Swiss Cafe”.

Surprise-surprise: Felicia doesn’t have 100% Swedish blood. Her father’s name, Margineanu, who lives in Romania, betrays her. “I was born in 1993, 21st January in Stockholm, Sweden. My mom is from Sweden but my dad is from Romania.” reveals Felicia the mystery surrounding her family name. 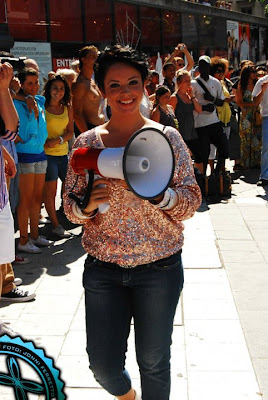 When she is not occupied organizing protest movements Felicia likes to practice Latin dances and Cuban Cabaret. But her biggest passion is photography. She is a professional photographer leading her own company and she just received a full time job in a photo boutique in Stockholm.” I got a digital camera as a birthday gift from my grandma and mom and that camera changed my life forever “says Felicia whose future personal project is to organize a big photo exhibition with the theme – Mixture of people in Sweden.

Her future plans don’t stop here. Felicia is working hard on a project which she believes can change the way young girls look at themselves.” I plan to go in schools and have lectures about the beauty in media. I know many young girls which are having it hard with their confidence just because of the misrepresented beauty in media - we have Photoshop, retouch, etc. I want to make them aware of it and inspire them to take control of their own lives and make them feel beautiful and push them to reach their own dreams. My plan is not to have a typical lecture, I want to discuss and talk with them more than I talk myself.”

Felicia Margineanu:” Speak out loud and be confident! And then add your personality to it…”

Logically now comes the question that is found on everyone lips: how did a 17 years old girl manage to have such an impact on society? Did she find her inspiration reading books about leadership and art of rhetoric? A part of the answer comes directly from the source:” I get inspired of life. Of people I meet, of people I´ve met, places I´ve seen, places I want to go to see. Situations I´ve been through, situations people have been through. Nature, art, music. I find inspiration in everything. But my biggest inspiration is to make my family proud and to inspire people myself. I actually think that I´m my own role model. I want to be the best person I can become.“ says Felicia.

While most people of her age wish for a new Playstation or wait hours standing in line to buy a ticket for the latest Harry Potter movie, Felicia amazes with its lucidity and maturity. Is there a recipe for leadership? If yes, I think I’m lacking a couple of ingredients. If not then maybe leadership is something that you are born with. ”I’ve always felt like a leader. People always saw me as the leader in school when we had project groups. Who knows one day maybe you´ll see me as a leader of a party, or maybe a country? Who knows...?”says Felicia who also strongly believes that “men are more likely to take, women are more likely to give.”

And she…gave! Although she is like any other normal teenager Felicia managed something that will remain in history and also in the minds of many individuals that took part on 20 September 2010 to the Stockholm protest.”Just a few days after the demonstration, I saw that there were at least 5 new demonstrations here in Stockholm. They invited me and said that they felt inspired by me. But mostly, I know that this demonstration made people talk more with each other. I think the most important thing is to talk. Speak about the subjects that are under the surface. “concluded Felicia Margineanu.

I seldom leave comments on blog, but I have been to this post which was recommend by my friend, lots of valuable details, thanks again.

hi, new to the site, thanks.

You got great points there, that's why I always love checking out your blog.